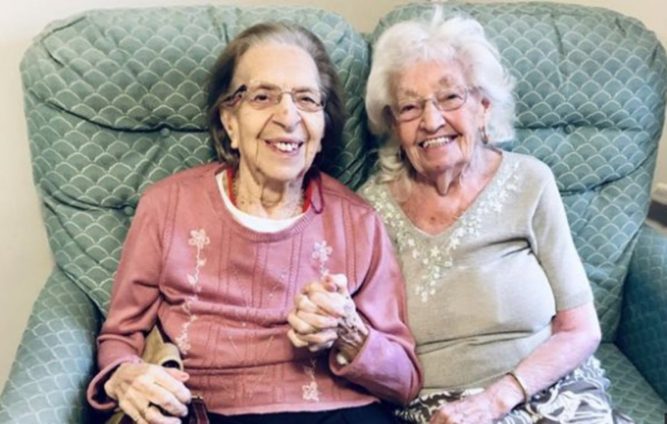 How long have you known your best friend? Kathleen Saville and Olive Woodward are best friends who have a reputation for getting into mischief, but the amazing thing is that these two ladies have been getting into mischief together for more than 78 years. Olive and Kathleen are now 89 years old and they met at age 11 in 1941. When the two met back during World War II, they instantly bonded because they have a similar sense of humor, they say. In 2020, the two are making mischief in the same nursing care home. They don’t exactly cause trouble, but they do occasionally have to knock some staff into shape, they say.

data-reader-unique-id="10">In fact, Kathleen said that she “just raced one of the managers down the hallway for a laugh.” They say laughter is the best medicine and if that is true, it explains why these two BFFs are still in such great shape. Kathleen moved into Mansfield, England’s Berry Hill Park in 2018, and a few months later, Olive moved in. Not only are they lifelong BFFs but they’re also widows, so they’ve been through a lot in life together. They have rooms on the same floor of the care home, so that means they’re not often apart. Olive said that when Kathleen moved into the home, she missed her.

Olive was going to see Kathleen every Saturday for lunch, and at some point, she thought, “Why don’t I move in, too?” It just made a lot of sense to her. Olive knew that if she ever needed anything, she could just go to her friend, and that included for a good laugh, too. They’re great about laughing over whatever is troubling them. They also love getting all “dolled up” together and they always have. Kathleen said, “We’re like giggling schoolgirls and we still put on our lippy and get dressed up.” According to Kathleen, their mantra has always been “If you’re got it, flaunt it.”

The facility’s manager says that Kathleen is a “proper flirt,” while Oliva is much more reserved. “The sparkle is still there. They are full of mischief,” the manager, Sally Tebbett, said, adding, “They never stop chatting and giggling. It’s so endearing, they genuinely love each other and can see that.” The two friends said that they’ll be together forever, and will even be best friends in heaven.

Share on FacebookTweet
Share
Previous Pierce Brosnan and Kelly’s son Dylan is all grown up and very successful in many fields
Next This Artist Fills The Streets Of New York With Color And Carelessness As He Beautifies Walls, Manholes And Pipes.